Just like everyone who “awakes” in The Matrix, affiliates are battling with a harsh reality: 2016 saw more than half of web traffic being bots, and even the larger half of that was bad bots. It’s safe to assume the Internet is infested with fake traffic, ranging from low-quality auto-refresh bots to more sophisticated ones to traffic exchange systems run by real people and everything in between. If you’re wondering why fake traffic is gaining so much ground, the answer is simple – it pays off.

For starters, it’s far too easy for fraudsters to set a fake traffic generator and churn out unusable data. As such, phony traffic has become a sort of a commodity, severely cheapening online advertising. Secondly, non-human traffic is becoming more inventive by the day, passing as organic readouts for much of the time and thus, proving its effectiveness. While we wait for the numbers of the year that’s recently passed, here’s how you can tell if a fake traffic generator is trying to scam you out of your earnings:

The Method Behind Fake Traffic Generators

Fake traffic generator is any tool (bots included) that can generate page views to any website and target user’s PPC ads, meaning hundreds of views and clicks in a short period, as well as boosted page/ad views. This small piece of software rummages the Internet and either finds or uses (depending on the configuration) proxies and then automatically visits a website or an ad to increase the view count. The webpage in question usually loads in the background, so the actual visitor doesn’t really see it, it’s just registered as another stat. On a similar note, traffic exchanges act in the same fashion but with a more web-based approach. The majority will force a user to view the page, so an actual human is behind the click. However, the person is not a part of the targeted audience and as such, not really interested in the content. Instead, they are just visiting to get the exchange credit/point/token (whatever it is they get) for their own online property to be visited. 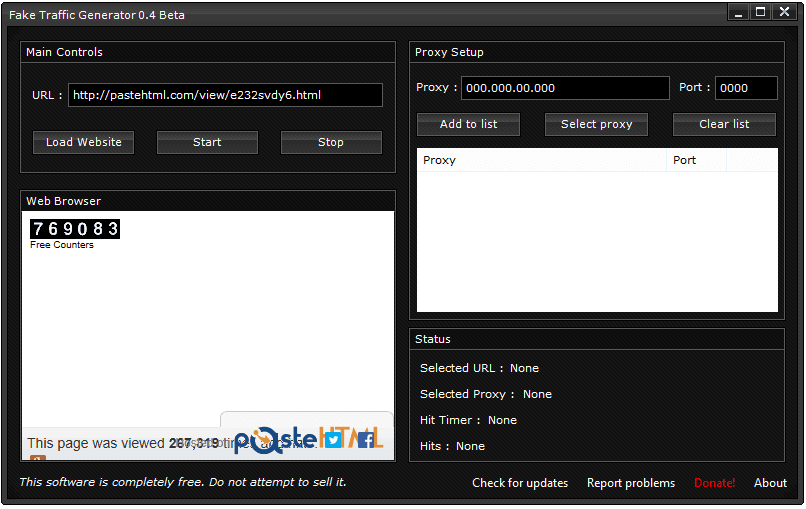 An example of a fake traffic generator
Image credit: SourceForge

What does an affiliate get out of this? Diddly squat, unless you count a headache and bloated analytics data as part of your bottom line value. And therein lies the key weapon in the fight. Every click leaves a trace in the form of an analytical imprint, something you can leverage to avoid being targeted and bombarded with fake traffic.

How to Spot the Signs and what to Do About It

The problem of phony traffic is widespread and costing the entire online marketing industry some serious bucks. Still, there are some ways affiliates can reduce their exposure to it. First of all, affiliates should be cautious of (not to mention, avoid altogether) using unknown websites, especially those that have relatively recent history and high volume of traffic and click rates. Instead, they should only work with proven traffic sources that are transparent about their traffic and can demonstrate their ability to detect and prevent suspicious users.

For more obvious signs of fake traffic, you need to be thorough with internal analytics. If your affiliate campaigns originate from your own website, you can examine visitor behavior (for instance, mouse movement, scroll, heatmaps, etc.) to determine if the traffic is coming from a real person and not from a mindless piece of code moving across in a linear fashion. You can also compare traffic flows and patterns for any anomalies that might scream scam. As for more specific metrics, an unusually high bounce rate may be a sign of fraud traffic, just as are low page views and short average session duration. In addition, a high percentage of new sessions could indicate bots come and go without any real interest in your content. The same goes for a high number of unique visitors – if there’s little to no engagement or interaction, this may be a sign of an underlying problem.

PPC ads are a bit trickier, and a lot of it rides on the pick mentioned above (hopefully trustworthy) for your traffic source. A look at your analytics demands special attention to your geography-related data. The sessions should be consistent with the content of your offer. For example, if a large part of the traffic is coming from a region or a country that speaks a different language you’re not targeting with your content, it’s most likely bogus. Also, if the amount of direct and referral traffic doesn’t match the actual traffic, chances are the traffic is fake. Naturally, the IP addresses, domains, and subdomains that are arriving at your ads should also be under a watchful eye – basically your fake traffic 101 rules.

In addition, there are plenty of available tools such as ClickCease, ClickGuard, Improvely, and others that take the fight to the fraudsters. They provide real-time detection and protection for PPC and display ads from malicious software and click fraudsters, keeping the damaging bots at bay. More intuitive ones offer exclusion methods that shut out IP addresses during determined timespans (either a specific IP or an entire IP range), so you don’t block whole areas for a long time and lose valuable clicks.

Keep in mind one thing: a single, specific metric won’t tell you everything you need to know, particularly if you’re getting a steady stream of both real and fake traffic. Identifying phony traffic generator scams largely depends on your ability to put two and two together and determine multiple factors that point to any suspicious or odd-looking data that doesn’t match the performance of your affiliate campaigns.

Cheap, phony traffic is easy to find – just Google “fake traffic generator” and see for yourself. For affiliates, fake traffic interfering with their campaigns means a severe impact on their bottom-line. The ability to form and execute a winning advertising strategy relies on a thorough and accurate read of campaign analytics. Allowing fake traffic to rampage through your campaigns distorts the crucial data insights that enable affiliates to grow and succeed. Commitment to in-depth analysis data should be at an all-time high, considering the expanding non-human presence online. Even if the traffic market is fairly unregulated and severely affected by this issue, that doesn’t mean your campaigns have to be. Far from it.