How to Scale Your Advertising Budget

Have you ever heard of the Dubai principle? Of course, you haven’t because we just made it up. According to our (just made up) principle, you can make a problem go away simply by throwing money at it.

The sad thing about the Dubai principle is that when it comes to scaling an online advertising budget, it does not work. You might have a good campaign with a solid conversion rate (or whatever other interaction you consider success), and you might have picked the best affiliate network, but adding more money does not mean conversions will proportionally grow. As a matter of fact, that is more likely not to happen.

That is because many affiliate pros do not scale their budgets properly and just end up wasting precious funds and time. In this post, we will give you a couple of tips and ideas on how to scale your advertising budget to make sure you are actually drawing the best of your campaigns.

Here is what usually happens: For example, an affiliate creates an ad campaign and sets a daily budget of $100. He/she gets 50 clicks for it and is happy with the results. So, he/she decides to increase the budget to $200 a day, hoping to get 100 clicks for it, but that doesn’t happen. Instead, there might be 80 clicks, or 70. Heck, it might even stay at 50. Instead of increasing the number of clicks, our affiliates have only thrown money at the problem, and the problem did not even flinch. Still, the trend of increasing online ad spending continues. As you can see on the image below, Statista forecasts that ad spending on digital in total will rise another 10.9 percent in the next three years – 21.8 percent for mobile, and 12.4 percent for search and social. 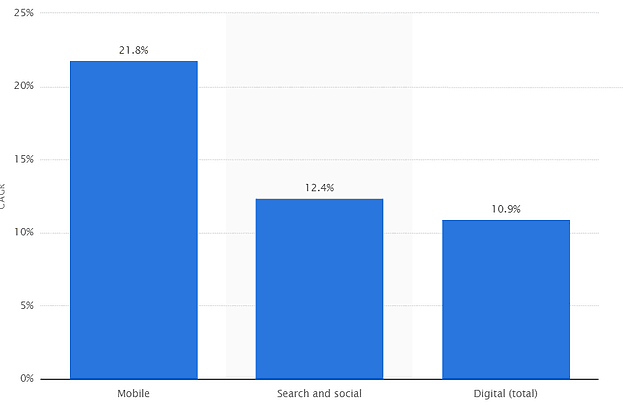 Instead, try optimizing your campaigns. Here are a few options to try out:

Many affiliates tend to go down the line of least resistance, focusing on target groups they already know are responsive. So they focus on proven ads, the ones that they know will bring results. This can limit growth as responsiveness is already close to plateauing. Instead, affiliates should experiment with new target groups that might be interested in their product or service.

When looking for new target audiences, the first thing to do is look for lookalikes or similar audiences.

Make small changes, one step at a time

By now you have probably realized that scaling a budget has very little to do with adding more money to the equation. It means optimizing your campaigns, changing them to bring better results. However, it is very important not to change things abruptly and on a large scale. If you are going to change your budget, goal, target audience, ad format, make sure you do not make all these changes at once. You need to measure every change you make to see if it is propelling you in the right direction. Only by making small changes will you be able to track their success and spot when, and why, your campaigns have started losing steam.

Now we know what to focus on. Instead of investing more money, the focus should be on finding new untapped audiences, and changing various elements of existing campaigns until optimal results are achieved. It is a long, tedious process, but definitely worth the time. Usually, successfully scaling budgets can be split into three steps:

2) Test them with different audiences

3) Start changing them *for* different audiences

First thing you will want to do is clone your best ad campaign. Leave the original intact, and increase the budget on the clone. Make sure you do not change absolutely anything else but the budget. Have both campaigns running at the same time, for the same time period and against the same target audience. Keep increasing the budget until it is no longer worth investing. That way you will identify your current campaign’s limits, and see if you have already overdone it. It will also give you a benchmark with which you will be able to compare all other results.

After identifying how successful your initial campaign is, the next step is to test it against a lookalike audience. Once the lookalikes have been determined, run a cloned winning ad campaign against the new group to test it. Just as in the previous step, make sure you test it in the same timeframe as the original campaign. Give the ad set at least 24 hours before collecting and analyzing data. In case you are not satisfied with the results, try a different group.

Now that you have identified the best ad campaign and an alternative target audience, it is time to start changing the campaign in order to see if there are any variables that work better. What you will want to do now is change the goal of the cloned campaign for the lookalike audience. If the initial campaign had a goal to increase conversions, try going for sales, or clicks instead. It is very important to keep in mind what we said earlier in the article – whatever you change – always make sure you change just one parameter at a time.

These three steps should help you scale working campaigns.

There is always room to scale, but that room should almost never be filled with money. Drawing the absolute maximum out of your ad campaigns means you need to find your outer limits, test new audiences and platforms, change the ad sets tentatively and monitor each tiny detail.

Lookalikes are your best bet when finding new and untapped audiences, and changing the ad goal can sometimes work wonders, all without spending a dime more. We hope that the tips and tricks listed here gave you a few cool ideas and motivated you to progress furthers. Good luck!