Affiliate marketing, as an easily accessible practice that promises financial stability and professional freedom for everyone involved, has seen tremendous growth in the last couple of years. With its popularity growing, and more people entering the fray, it has also drawn in many fraudsters.

Affiliate ad fraud is nothing new, it has been around since the very inception of the concept, but the growing industry has made great strides in minimizing its footprint. Fraudsters are, by their very nature, quite creative, so despite tremendous efforts, scamming is still fairly widespread.

Regardless of your position within the affiliate advertising universe, it is always useful to learn the state of the industry and the heading it is taking. Take five minutes to learn a few things about affiliate ad fraud and how you can make sure you do not become its victim at any time.

Despite the vast abundance of available data that speaks about the ad industry in general, the effect that fraud has on digital advertising is still somewhat unclear. The first thing researchers can’t agree on is the size, the scope and the effects fraud has on digital marketing. While some say roughly two percent of all ads are fraudulent, others, like The Association of National Advertisers, believe $7.2b is being lost every year due to non-human traffic. Then there is the Interactive Advertising Bureau that claims the US marketing industry loses $8.2bn a year to digital ad fraud.

What everyone seems to agree on, however, is that digital ad fraud is not shrinking. As a matter of fact, ad fraud and ad spend are hitting all-time highs. One proof that speaks to this conclusion is the recently discovered and busted ad fraud network, Methbot. Discovered in December 2016, Methbot has had more than half a million IP addresses which were consuming roughly 300 million impressions a day. American journalist and security expert Brian Krebs estimates that advertisers lost up to $5 million a day due to Methbot.

2. Nobody Can Guarantee Top Spots on SERP

For affiliate marketers, top spots on search engine result pages are like a chicken that lays golden eggs. High SERP (Search Engine Results Page) position means a higher influx of their desired target audience, which consequently means more hits, more purchases, higher commissions, and an overall successful bottom line. That is why many affiliate marketers, especially newcomers to the business (but veterans, as well), look for shortcuts to Google’s first page for various queries and keywords.

Fraudsters are seeing this as a huge opportunity, with many of them promising, guaranteeing top spots on SERPs. Some are taking this disgraceful practice to whole new levels, promising the improbable – within 48 hours. This does not mean all SEO agencies are frauds – the vast majority probably is not. But if you decide to work with one, make sure to ask them if they can guarantee a high ranking on specific keywords, fast. If they confirm without blinking an eye, walk away. Search engine algorithms (especially Google’s) change often and change a lot. Even if they didn’t change, indexing a site and having it show up on search engines takes time and a lot of it. Some will even tell you they have friends or special connections in Google. Those people are worse than Mekki Torabi and should be avoided at all cost.

3. Influencer Marketing Fraud is Getting out of Hand

For everyone in the affiliate marketing business, having an influencer on their side is equal to hitting the jackpot. These people, which can be (but don’t necessarily have to be) celebrities (fashion models, sportspeople, actors or musicians), usually come with a huge and devoted social media following. Their followers enjoy consuming the content these influencers create, and are usually inclined to make purchases based on their favorite public person’s suggestion.

So it is to little surprise to see that some people have started faking celebrities. Sounds crazy, right? Check this out. A marketing agency created two fake Instagram accounts and filled them with stock photos and other fashion model photographs it managed to obtain online. It even bought fake followers, as well as fake comments (!!!) to make the profiles feel and sound more convincing.

The result? They landed two paid brand deals. The sad part is that this is just one publicly known example. God knows how many other examples are out there. Some reports claim that three in ten Instagram accounts are fake. 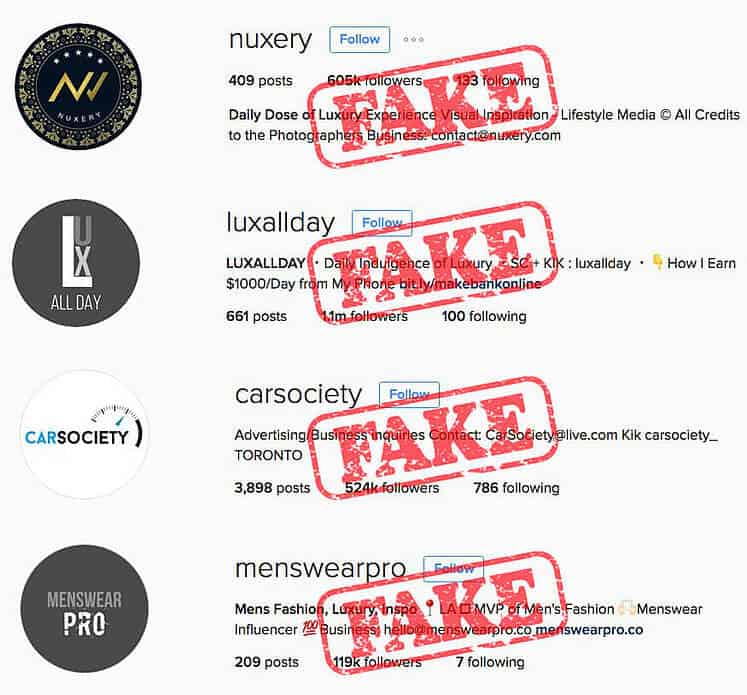 Despite the fact that some people actually landed in jail for this practice, it still has not disappeared. It boils down to affiliates “stuffing” specific cookies in their visitors’ computers. Even if the visitors don’t end up using the affiliate link to make a purchase, but buy something else on their own initiative, the purchase will still get credited to the affiliate, thanks to the fake cookie.

Affiliates use all kinds of different methods to stuff their visitors with fraudulent cookies. Images or iFrames seem to be the most popular method, followed by pop ads, toolbars, Adobe Flash components or WordPress plugins. This is another reason why choosing the right ad network is essential to staying safe.

One of the more popular examples of cookie stuffing fraud happened back in 2014 when Shawn Hogan (eBay’s number one affiliate) pleaded guilty to defrauding eBay of an alleged $28 million. He was sentenced to five months in federal prison, three years’ probation, and a fine of $25,000.

Despite vast efforts all around, affiliate ad fraud is not going anywhere, anytime soon. Pressed by an increased amount of research and inside data, as well as the growing size and value of the industry, fraudsters are forced to find new and creative ways to do their nefarious deeds. It’s the way it is and will be for quite some time (we don’t dare say forever) as long as there’s a shortcut to making a dime without much work (off other people’s back, that is). With all this data, it’s hard to stay excited about affiliate marketing. Still, it’s not quite David vs Goliath…

What You Can Do

By learning about fraudulent practices, you can spot them in the wild and be able to protect yourself properly. Thus, it’s important to be educated on the ongoing dangers and be prepared for whatever gets thrown at you. In addition, it’s even more important to only deal with credible programs with ample fraud prevention and protection methods, as well as get your traffic from trustworthy ad networks who are as tough on fraud as The Rock is on carbohydrates. In this fight, you’re only helpless if you allow it. Don’t.